is the basis of rural incomes in Central Asia

are a major risk to the agricultural sector

can be used to estimate wheat yields

is improved by new data 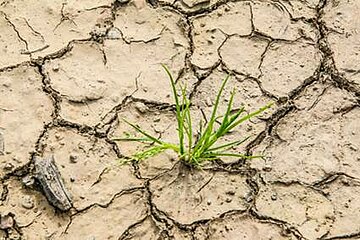 Growing population and land degradation make food security a development challenge in many world regions. Also in Central Asia, food security a major political concern. Except for Kazakhstan, between 20 % and 50 % of national grain consumption in the region depends on imports. One problem is the undeveloped agricultural sector. For instance, agricultural production is rather sensitive to rainfall variability since only 25% of the region’s arable land is equipped for irrigation. While the 2000s already witnessed the two worst drought in the history in Central Asia, the occurrence of weather extremes is expected to further intensify.

In addition to national food security concerns, increasing climatic risk also have wider socioeconomic implications. For instance, the low and risky nature of agricultural income motivates many rural inhabitants to seek off-farm employment in the close vicinity or abroad, especially in Russia. The resulting high reliance on remittances (e.g. 30% in Kyrgyzstan) makes those countries very vulnerable to economic and political disruptions in the migration destinations countries.

Klimalez aims at developing and piloting an index-based agricultural insurance program for various Central Asian countries. In the scope of an insurance pilot, the developed insurance product will be sold to producers in Uzbekistan, Kazakhstan and Kyrgyzstan. Furthermore, the impact of insurances on farmers’ production decisions and rural welfare will be measured. The experimental study design (randomized controlled trial, RCT) will allow scientific robust and tangible insights concerning the impact of modern insurance markets on food security, climate resilience and sustainable production. Ultimately, the research results aim at supporting national governments in implementing a sustainable insurance program on national scale.

ALSO VISIT US AT Researchgate